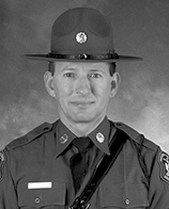 Cpl. Engelhard was transported to the St. Clair Health Center by Eureka Ambulance with serious injuries. At 11:20 a.m., Cpl. Engelhard died from the injuries he sustained as a result of the crash.

Corporal Dennis E. Engelhard, 49, was the 28th member of the Missouri State Highway Patrol to make the ultimate sacrifice while serving and protecting the citizens of Missouri. He was survived by his parents and a brother, sister-in-law, niece, and nephews.