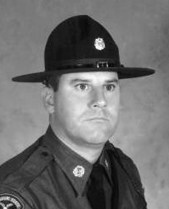 ​Sergeant Randy V. Sullivan was killed in a traffic crash on February 17, 1996, on Missouri Highway 72 in Madison County, eight miles west of Fredericktown, Missouri. The crash occurred when Sgt. Sullivan checked a vehicle exceeding the speed limit by radar, turned around to overtake the violator, and, as he came over a hill, apparently ran off the roadway in a curve and struck several trees. Troopers and citizens responding to the scene found Sgt. Sullivan’s patrol car engulfed in flames, and Sgt. Sullivan’s body was located in the car.

Patrol Recruit Christopher R. Thompson, who was riding with Sgt. Sullivan, was found outside the vehicle. Thompson sustained moderate injuries.

Sergeant Randy V. Sullivan, 40, was the 18th officer to lose his life in the performance of his duties. He was survived by his wife and three sons.