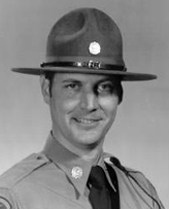 Trooper Dennis H. Marriott died June 13, 1981, from injuries suffered on June 1, 1981, when he was struck by a vehicle. He had exited his patrol car for a traffic stop. The traffic crash occurred on U.S. Highway 54 south in Jefferson City, Missouri, in Cole County. Tpr. Mariott died from his injuries at the University Hospital almost two weeks after the incident.

The vehicle that hit Tpr. Marriott stopped momentarily after the incident and then left the scene. The vehicle was stopped a few minutes later by the Jefferson City Police Department and the female driver, Mary Ann Holzer, was found to be intoxicated and was arrested. The driver later pled guilty and was sentenced to 10 years in prison on a charge of manslaughter.

Trooper Dennis H. Marriott, 36, was the 11th uniformed member of this agency to lose his life in the line of duty. He was survived by his wife and four children.