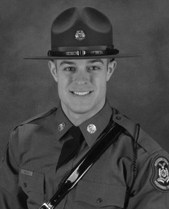 ​On August 28, 2015, Trooper James M. Bava was killed in a one-vehicle traffic crash in Audrain County. At 8:29 a.m., Tpr. Bava radioed he observed a motorcyclist commit a traffic violation on Missouri Route FF in Audrain County. A few minutes later, communications operators at Troop F Headquarters in Jefferson City attempted to contact Tpr. Bava by radio and did not receive a response. At 8:35 a.m., Troop F received a report regarding a Missouri State Highway Patrol vehicle being involved in a single vehicle crash on Route FF, just east of Audrain Road 977. Emergency responders arrived on the scene and confirmed Tpr. Bava had been killed in the crash.

In November 2015, the Audrain County Prosecuting Attorney’s Office charged a 20-year-old Mexico, MO, man with second-degree murder, resisting a lawful stop, resisting a member of the Missouri State Highway Patrol in discharge of his official duties, careless and imprudent driving, exceeding the speed limit, and failure to register a motor vehicle with the Department of Revenue.

Trooper James M. Bava, 25, was the 31st member of the Missouri State Highway Patrol to lose his life in the line of duty. He is survived by his parents, three sisters, and a brother.