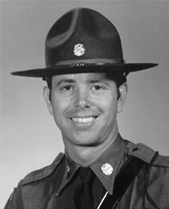 Trooper James M. Froemsdorf, 35, was shot and killed with his own on March 2, 1985, on Interstate 55, near Brewer, Missouri, in Perry County. Tpr. Froemsdorf had stopped Jerome Mallett for exceeding the speed limit, and a radio check revealed Mallett to be wanted for armed robbery in Texas. Tpr. Froemsdorf had handcuffed Mallett and was preparing to take him to the Perry County Jail when Mallett was able to free one of his hands and attack the trooper. During the ensuing struggle, Mallett was able to take control of Tpr. Froemsdorf’s weapon. Mallett shot and killed him in the patrol car.

A massive manhunt involving several law enforcement agencies resulted in the capture of Mallett on March 5, 1985. Mallett was convicted of murder and sentenced to be executed. His execution occurred on July 11, 2001. Mallett’s last words included an apology to the Froemsdorf family.

Trooper James M. Froemsdorf, 35, was the 12th member of the Patrol to lose his life in the line of duty. He was survived by his wife and three daughters.