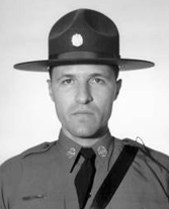 On October 14, 1969, two men were arrested in the act of burglarizing Cleeton’s Radio and TV Service in Montgomery City, Missouri. Following a preliminary hearing in magistrate court, the two men were returned to the Montgomery County Sheriff’s Office. This area was shared by the Missouri State Highway Patrol. One of the men, Carl Edward Williams, was seated next to the desk occupied by Trooper Jesse R. Jenkins. The second man, Robert Melvin Thomas, was seated next to where Sheriff Clarence Landrum was seated. A deputy and the city marshal were also present.

Sheriff Landrum was advised he had a telephone call, and when he reached across the desk to pick up the phone, Thomas removed the sheriff’s five-shot revolver from its holster, stood up, and ordered the officers to stand still. Tpr. Jenkins stood up from his desk and he and Thomas immediately engaged in an exchange of gunfire in which both of them emptied their weapons. A total of 11 shots were fired. Tpr. Jenkins fell beside his desk as Thomas fled from the office and up a flight of stairs. Tpr. Jenkins got up and moved through the doorway where he collapsed. The deputy and city marshal pursued Thomas out the door and up the stairway while the other prisoner remained in his seat near the desk previously occupied by Tpr. Jenkins. Sheriff Landrum remained with Tpr. Jenkins. Thomas collapsed on the steps and was handcuffed by the city marshal and deputy. Thomas died on the stairway from the gunshot wounds inflicted by Tpr. Jenkins, who, in spite of being mortally wounded himself, continued in his effort to apprehend Thomas.

Trooper Jesse R. Jenkins, 29, was the eighth trooper to die in the line of duty. He was survived by his wife and two sons.