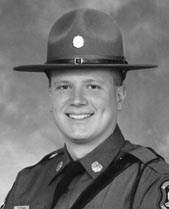 ​Trooper Ralph C. Tatoian killed in a traffic crash at 4:45 a.m. on Wednesday, April 20, 2005, on Interstate 44 in Franklin County. Tpr. Tatoian, a member of the Patrol’s Special Emergency Response Team (now known as Special Weapons and Tactics or SWAT), and other members of SERT, were responding to the Franklin County area to assist with the manhunt for an armed burglary suspect who had shot at a deputy in Gasconade County.

Trooper Ralph C. Tatoian, 32, was the 25th member of the Missouri State Highway Patrol to lose his life in the line of duty. He was survived by his wife, a daughter, and two sons.

Massigh J. Stallmann, 25, of High Ridge, Missouri, was convicted of second-degree murder in the death of Tpr. Tatoian. Missouri law states, “A person is guilty of second-degree murder if he commits any felony and, in the perpetration of that felony, another person is killed as a result of the perpetration of that felony.” Tpr. Tatoian was killed in a traffic crash while en route to join the manhunt for Stallman. A jury deliberated over three hours before delivering their guilty verdict. Stallmann was sentenced to life in prison.