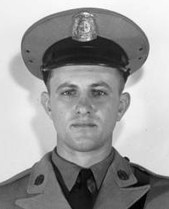 On Thursday, October 27, 1955, Trooper Wayne W. Allman was on patrol in Cass County when he received a call of a traffic crash on Missouri Highway 13 south of Clinton, Missouri, in Henry County. With emergency equipment activated, Tpr. Allman drove south on Missouri Highway 35 (now Missouri Highway 7) en route to the crash. At approximately 1:45 p.m., Tpr. Allman approached the intersection of MO-35 and Missouri Route B near Creighton, Missouri, when a northbound pickup truck turned onto Route B into his path. Tpr. Allman swerved and missed the pickup then swerved back to avoid striking a second northbound vehicle behind the pickup. The rear of Tpr. Allman’s car just caught the front of the northbound car. The impact caused Tpr. Allman’s patrol car to careen down the highway and overturn. Tpr. Allman was ejected from his patrol car.

Although seat belts were not standard equipment in automobiles at the time, the decision was reached within a few days to install them in all patrol cars before the end of the year.

Trooper Wayne W. Allman, 34, became the seventh member of the Missouri State Highway Patrol killed in the line of duty. Tpr. Allman was survived by his wife and two sons.